Once again, I realized I must have a horseshoe strategically placed on my person. A few weeks ago, my friend and comedian, Trent McClellan, texted me asking if I could emcee for Gerry Dee at the Jack Singer Concert Hall that weekend. Seriously? Seriously. I said, “Yes, thank you,” which I believe may have sounded like, “EEEAAAAHHHHGGGGGAAEEEEÜOO!” and began savouring the anticipation.

The Googling began. I found out that the Jack Singer can seat 2059 people. I know. Why an odd number? Where’s the symmetry in that? Once I arrived at the Jack Singer embarrassingly early (keener), I stood in the foyer with people waiting to see the show. My dear friend and comedian, Cory Mack, texted with a delightful surprise that she and her husband, Ian, would be at the show! Why yes, I do have excellent taste in friends. Thank you for noticing.

I know you’ll never use this information for evil, but I can tell you that I may have walked up to the ushers and simply said, “Hello! I’m on the show tonight. Can you tell me where I can find the dressing rooms, please?” They may have kindly pointed me in the right direction. I may have wandered around backstage, side stage, in the basement, in a lounge and on the actual stage. At one point, I’m may have seen a staircase move and Ron Weasley may have winked at me. But obviously, nobody would ever use this information to go backstage and stalk Jann Arden (just a name out of the blue) or anything.

At some point, Trent showed up and I felt more like myself because he’s a good hugger and he had played the hall before. He is a positive force, is always smiling, and was featuring on the show as well. Oh also, no big deal, he was flying to the Dominican at midnight that night to run an errand which he referred to as “getting married.” He’s so dramatic.

His silly influence was just what I needed before the show. He told me that one of the weirdest things is how long a walk it is to get to the microphone. That is why I used a skateboard.


Gerry Dee came in and, like most comedians, was friendly and casual and – odd – a normal human being. Weeeeiiirrrd! I hadn’t met him before, so I found it kind and trusting of him to take Trent’s word for it and let some strange broad on the show. He probably believed Trent’s “Oh, I have to leave right after my set to catch a plane to get married” story too. Pfft. Gerry was super friendly and positive and made me feel like a pro.

At some point, some official person said it was 2 minutes to showtime and that’s when I realized I’d forgotten to wear pants. I quickly fashioned a pair from the brocade drapes in my dressing room while a gang of children sang, “Doe, a deer…”  I immediately had Security remove them.

Most of the next bit, or “The Show” to be professional, was a happy, floaty blur. On my way from stage right to the microphone, I was able to do a nollie and a kickflip before I hit the half pipe and stuck the landing on my airwalk grab. I didn’t ride goofy foot like usual because I wanted Trent to be able to follow me. 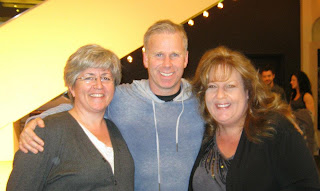 I personally think all three of us were hilariously funny even though some of you will claim it was the coke we snorted off the hookers’ asses before the show talking. After the show, Trent was gone, of course. His commitment to a practical joke (the wedding) is tremendous.

Cory & Ian were in the lobby where we happily embraced and they fanned me with palm fronds as is standard in my performance rider. Then we got this great picture and I got paid. Yeah. Paid. I was just happy to have the chance to practice my boarding in an acoustically perfect concert hall. Bonus.

That's what she said.